Surely one of the best tree surgeons in the world 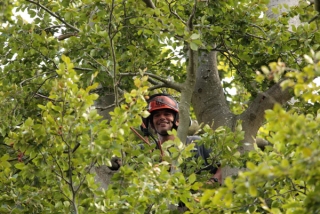 Pablo has been working on the trees today and watching him work has left me almost 100% sure he must be one of the best tree surgeons in the world. OK, this is a bold statement but I really can’t think of any other attributes a tree surgeon would need in addition to those Pablo has:

He does of course make a mess on the ground but you can’t hold that against him when he is dropping dead wood from 30m up!

The flagpole is restored

In Spring 2006 we redecorated the wooden flagpole and at the same time repaired the pole where damp had got in around the bolt holes. It was obviously too late because in March 2007, after a slightly windy night the flagpole snapped and was found lying on the drive.

For some reason I took it upon myself to make a new flagpole.

The aim was to make a wooden flagpole that would last forever. Impossible I know, but you have to start somewhere! However the first challenge was where to find a pole. Generally timber merchants don’t stock 9m trees so, with some help, I contacted Mike Cameron a Forester in the Plashett Park Wood, East Sussex which is run for charitable purposes. Mike very kindly agreed to select a suitable Larch and prepare it.

Things were going well and by Oct 2007 the flagpole was ready for collection. The only problem was how to transport it. Although not ideal, the only method at my disposal of creating a 9m long vehicle was to take a boat on its trailer over to the wood and to return with the flagpole strapped down (6m in the boat and 3 over the towing vehicle). This made for a nerve-racking journey so much so that it never occurred to me to take a photograph.

As I looked at the tree, now back home, I did get a sinking feeling when I realised just how much work was going to be required to get this rough wood down to a paintable surface, despite Mike’s preparation work.

We needed to let the Larch age and so the flagpole project was put on one side with the exception of sourcing two pieces of oak for the base.

The other dilemma which needed solving in the meantime was where to put a flagpole. By the time the old one broke it was sandwiched between two fully grown trees meaning the flag never really flew. Several places were explored but none appeared right : too far from the house, too close to the house etc. Thankfully the problem resolved itself when a tree died in 2009 in what was to become the obvious place.

With the dead tree needing to come out it was time to get the flag pole prepared and the base constructed. Sadly the pole had dried too quickly and there was a significant amount of filling required, not to mention several days of sanding. Wood glue was drizzled into the bottom of the cracks and then a two-pack filler was used to fill and build up the surface.

The rough sawn oak also required a lot of sanding and I had the words of my school woodwork teacher ringing in my head about the importance of sanding right down to a fine grit and needing to do it again and again to seal the wood. So that is what we did.

Then each section of the base was decorated fully with Dulux Weathershield 8-year protection system – except instead of one coat of each the base received two coats of each. The base was then assembled leaving the hardest bit to last – drilling the holes!

The old flagpole had rotted where the pole’s bolt holes had been drilled. Inevitably moisture had crept in here. In an attempt to prevent this happening on the new flagpole a system was devised to line the hole and therefore fully seal the wood.

To do this, a larger diameter stainless steel pipe was inserted into the holes which was then bonded in place with epoxy resin. This was repeated for holes in both the pole and the base and had the added benefit of giving enough free play for the bolts to allow for minor inaccuracies in the hole alignment.

Despite taking the full force of the fall it was possible to salvage the original flagpole top with rope and pulley wheel. This was added to the Larch pole using the original coach screw and the alignment with the base planned.

Finally on 2 Dec the pole was installed in the base and the flag flown again. It stands 8.9m tall.

Having not exactly been a ‘flag man’ I was never very interested in flying a flag except on occasional special events. However I now find myself wanting to fly a flag all the time. This has led to a great deal of research into what flag protocol is. My research seems to suggest that on the whole the British have a somewhat indifferent approach to flags and ‘flag flying’ in particular. This seems a shame but then I wouldn’t be in a hurry to adopt the slightly obsessive approach of some countries.

What we need is a flag we can be proud of and get excited about flying – any suggestions?