I’m not sure I can remember ever feeling so overwhelmingly helpless or for that matter the sense of total dependency as I did on Sunday morning, facing a fire at Sennicotts.

We had been camping overnight with friends in a garden in nearby East Ashling. It rained most of Saturday night and so on Sunday morning, totally against the spirit of a camping trip, we decided to sneak back home to change from our damp clothes and maybe grab an extra bowl of cereal for breakfast. To be honest we felt both naughty and spoilt leaving our friends in search of some creature comforts!

I had just poured a generous bowl of Frosties with the intention of rewarding myself for ‘camping endeavors’ with a break from the routine Bran Flakes. But before I could tuck in there was gasp of exclamation because sitting in the garden was a fox. This could only be one fox, the same fox in fact that has eaten all 13 Indian Runner ducks and 15 chickens over the recent weeks. Sensing a rare opportunity to rid ourselves of this pest I ran outside bare foot, weapon in hand, to head off the fox at the end of the garden.

However moments later, as I ran around the corner of the garage I was met with smoke billowing out above the garage door. For a second I carried on running, totally focused on my prey, before I had a chance to process what I had just seen. Fire – in a garage – with no obvious fire risks – there was probably a non-fire related explanation for the smoke. This was totally off the radar. Fire practices: yes, but a real fire, serious building fire, this had never been part of my 38 years of life experience, it happened in other people’s buildings, not ones I was responsible for. Anyway it would always be someone else who discovered a fire first, I would hear about it because I was told there was a serious fire, I would never be the one to discover a fire.

It took only a few moments to process this before it hit me. This was a real fire, I had found it, it was my responsibility to do something and do it fast, very fast. My heart went from beating fast with apprehensive anticipation of finding my quarry to the adrenaline shot that comes with knowing you are about to have to do everything in your powers to stop something very serious happening and speed is the key to having any chance of success.

I turned and sprinted back inside. As I ran I tried to think what it was that could have caught fire in the garage. There was only one socket and it was turned off. It was a cold damp building at the best of times. My mind raced fruitlessly through the options while trying to simultaneously process the do’s and don’ts of tackling a fire.

I ran into the house and tried to calmly, loudly, clearly and with as much sense of urgency as possible tell Eloise, over the sound of a baby crying, she needed to call 999 now and tell them we had a fire in a garage, and to make sure they knew how to find us.

I grabbed a foam fire extinguisher from the house and realised I needed some footwear, I fumbled to put on my wellies (I managed some sort of association between firemen and wellies). The wellies twisted, turned and then buckled the faster I tried to put them on. I was aware it was taking me twice as long trying to do it fast but I couldn’t make myself do the job slowly – speed was everything but it didn’t help I was barefoot and still in my pyjamas.

I ran back to the garage fire extinguisher in hand but still with no idea where the fire was. Smoke was pouring out around the door and now through the roof slates the full length of the building. I tried to peer through the window but couldn’t see anything. I wanted to see the smoke inside, maybe get a clue what was burning. There was nothing to see. I knew the fire extinguisher needed to be at least aimed at the fire to be even worth letting off and the speed at which the smoke had built up told me this was a critical moment.

I needed to know where the fire was, but should I go in. Was this the moment to be a bit reckless with my safety? Was I looking at one of those moments you read about where a small amount of bravery averts a major disaster? I so wanted to open the door and give it a go. I was sure that there was just still time to tackle the fire with my foam extinguisher. I just needed access to it. And yet I knew if I opened the door and couldn’t identify the source of the fire for all the smoke, then I would have just gifted the flames with a massive intake of oxygen and there would be no stopping their destruction.

I decided I only had one choice. I discharged the foam extinguisher through the cracks at the bottom and top of the full width door. The wooden garage door was getting hot, the glass was even hotter.

I stood back and wiped some foam and the sweat off my face with my sleeve. It looked for a moment as if the flow of smoke slowed but it was only seconds before it was forcing its way out again. I knew enough to see the fire was continuing to build in intensity. The fire was making it’s way unchecked to that tipping point where it would consume everything in it’s path. I didn’t know how long I had but from the heat of the doors I knew how close we were.

There was nothing I could do. My only option was to run back inside and grab another foam extinguisher. I felt pretty hopless but doing something was better than watching the timbers in this grade II* listed building succuming to the ever increasing intensity of the heat.

Back in the house I checked with Eloise if she had got through to the emergency services. She had and they were on their way. Somehow this didn’t calm my fears and growing sense of helplessness. They needed to be here now if we had any chance of stopping the fire reaching its tipping point. It could be seconds it could be minutes. What we didn’t have was twenty minutes or half an hour. I knew where the fire station was and that was only minutes away, but how long it takes to mobilise a crew and engine on Sunday morning I didn’t know.

I ran back outside with the second extinguisher and round to the back of the garage. This was where the electrical socket was and maybe I could discharge this extinguisher through the small window at the back. The glass was hot but there was no opening to point the extinguisher through. I was faced with the dilemma again of whether to break the glass and make an opening but run the risk of feeding the fire with oxygen. Increasingly helpless and my heart now beating with panic I ran round to the front of the garage.

Instantly I knew the fire had increased in intensity in the moments I had been back to the house. The smoke billowing out had more energy and I could now hear occasional pops and cracks from inside. Standing closer to the door it had got much hotter to one side. Almost too hot to touch. I thought for a second whether at this heat the glass window in the door might explode in my face. I turned my head slightly to one side as I discharged the extinguisher into the crack at the top of the door, this served to protect my face from the heat of the door, the risk of the glass shattering, and the shower of extinguisher foam.

This extinguisher was making no difference. It was clear in the few minutes since I had discovered the smoke the intensity of the fire had raced well beyond anything I could fight. The panic remained but the overwhelming sense of my helplessness had taken over. Not a dejected, abandoned or crumpled feeling but the exact opposite: a racing, intense desire to do something, with every fibre of my being wanting to change the apparent outcome, but thwarted, facing a cliff face, an immoveable object, stuck ‘in irons’ and facing an opposing force equal to and ultimately greater than my greatest effort.

I turned around to seek out my only solution. Where were they? I strained to hear the sound of sirens but could hear nothing. I strained my eyes and ears to try and catch a faint impression they were coming so I could lock on to will them in faster to the scene of the fire. I hardly dared glance at the garage. I knew the smoke would be getting more intense each time I looked. My fear was hearing the roar of flames, knowing the fire had broken out of its oxygen starved furnace and was freely gulping oxygen while feeding ferociousness on this old building. We weren’t there yet but I sensed how close we were.

Then I was sure I saw a flicker from the silent road, somewhere through the trees. It disappeared. I waited a moment longer and then a moment of relief. We might just be able to do this. I don’t know how fast the fire engine was coming but I willed it to go faster, and the second engine too.

Almost before they had stopped there were two full fire crews on the ground, each member assuming his or her role. It was at this point and only at this point that I realised the helplessness had faded away. To see the fire engines gives a little hope but to see the professionalism and teamwork of a trained fire crew arriving on site and setting about tackling a fire is the point at which you begin to believe you have been saved.

Within minutes they had the garage door open and the fire under control.

The blaze was centred on an Audi parked in the garage, the engine bay consumed. How close were we to the timber of the building catching fire? From the heat alone one joist, the other side of the garage to the car, had burnt through and was glowing. The fire officer’s estimate was 10 more minutes before the roof was consumed and the fire spread through the whole building.

The above is a personal account and record of the experience I faced. In the cold light of day several questions remain which you didn’t have to be present to find yourself asking:

We may never know the answers to the above, or may disagree, but one question I do know the answer to is ‘where would we be without the professionalism of the West Sussex Fire & Rescue Service?’ Helpless. 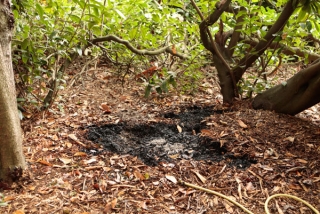 Something didn’t seem quite right at 7am this morning. The garden was full of bonfire smoke.

What became quickly obvious was the source of the smoke, a slow burning ground fire in the composting undergrowth. The cause of the fire was some ash tipped there 12 hours earlier from a small garden wood burner which itself had gone out 16 hours before. The ash was not hot although it did have a little warmth. Clearly enough to start a fire in these dry conditions even though we have just had a night of heavy rain.

We were able to put out the fire with a hosepipe but it served as a useful warning to be more careful about the risk of fires especially in these unusually dry conditions.