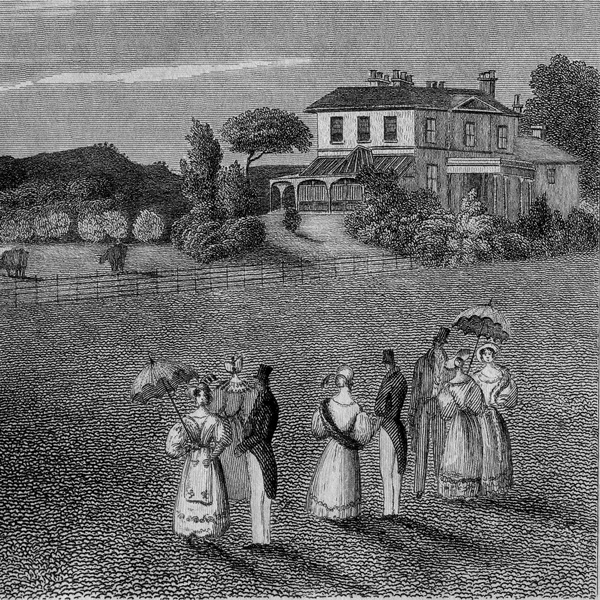 After serving in Madras, with the East India Company, Charles Baker retired, and in 1809 formed this small estate. In the following years, he built the house, lodge and finally chapel, and planted many of the trees now at their maturity. Charles Baker was the son of a Chichester Surgeon, and claimed descent from the Bakers of Mayfield, the great Sussex Ironmasters in early times.

The architect of the house is thought to have been James Elmes (1782—1862), who is known to have submitted a design for Oakwood, the house opposite Sennicotts, and who lived at Oving nearby. Elmes was a friend of Sir John Soane, and it will be seen that the entrance hall, which is cube shaped and has a ceiling of shallow ‘groined’ vaulting, is very similar to Soane’s drawing room at Aynho Park in Northamptonshire. The ends of the hall are in the form of shallow apses, with marbled niches, and below the bold cornice runs an egg-and—dart moulding. Both the drawing and dining rooms at Sennicotts have coved ceilings with a bead moulding on the ceiling flat, and an unusual leaf enriched torus moulding at the cornice.

Charles Baker lived until 1839, when the estate passed to his nephew, Christopher Teesdale. The Teesdales did not inhabit the house, but continued to be buried in the family vault below the chapel, until it was made into a Church for this part of the extensive Parish of Funtington, following the sale of the rest of the estate in 1929.

Between 1839 and 1929 the house was let to a succession of tenants, the most notable being Prince and Princess Louis of Battenberg, who had Sennicotts as their first home after their marriage in 1884. The house is mentioned in David Duff’s “Hessian Tapestry”, and another book called “Louis and Victoria”, and in an earlier work on Prince Louis written by Mark Kerr, the Prince’s letter at the end of June 1885 says how sad he was to leave Sennicotts.

The new owner in 1929 was William P. Wilson, who built the Music Room with a fine Venetian window at one end, a bow window at the side, and a shallow vaulted ceiling of the kind favoured by Repton, Soane and other Regency architects. After a period as “Combined Operations” during the last War, the house was purchased by Captain Geoffrey Bowes—Lyon (first cousin of Queen Elizabeth) who bought from a family home, Redbourne in Hertfordshire, the fine white marble chimney—piece in the Dining Room, and its three doors with their entablatures. The large rhododendron beds on the main lawn were also introduced at that time.

After his death in 1951, the house was occupied by his son, Major—General Sir James Bowes-Lyon, when not stationed in Germany, and who sold it to the present family in 1961.

The late Mrs. Rowland Rank, who had admired the house for many years, moved across from nearby Aldwick with her younger son, Mr. John Rank. Keen life-members of The Georgian Group they gathered much of the current history of the house when not playing a significant role as benefactors of the arts primarily in the Chichester area.

After the death of Mrs Rank in 1988, Mr John Rank carried on until 2002. Sennicotts is now the home of a grand nephew and his wife Mr & Mrs James Rank.